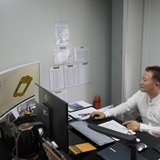 A Quick Delivery Mould (QDM) specialist says Draft Analysis is an important time saver for their business, and has played a major contribution towards meeting customers’ increasingly faster turnaround demands.

Based at Incheon in South Korea, Polyhitech Co. Ltd. use VISI as their CAD system for designing a variety of plastic injection mould tools for medical, automotive and IT products, and say it has slashed surface editing time by up to half.

“I can quickly find any undercut areas through the colour display by draft angle, and it’s possible split the parting line according to that.”

But they are not just ordinary mould tools. Polyhitech focuses on QDM, which is a manufacturing system for injection parts using 3D CAD data that shortens delivery time by assembling machined cores and cavities into a standard mould base. The system is used primarily for trial moulds for new product development.

It costs 40 per cent less than normal production, while reducing delivery time to between three and eight days, and is used largely for prototyping, verifying the mould at the pre-production stage, and small quantity batch production.

Since Polyhitech was established in 2007 the company has always looked to develop leading technology, and has invested in 19 machine tools covering the entire manufacturing process – mills for cutting the moulds, high-speed mills for machining electrodes and cores, EDMs, and injection moulding machines.

Polyhitech’s Mould Design Manager, Jisung Li, says as well as fast delivery times, customers also demand high precision, and that is where VISI, from Vero Software, comes in.  “The main reason we invested in VISI was that our previous CAD system couldn’t fully deliver our customers’ needs for shorter delivery times. When we received data from them we used to edit the surface before starting the mould design process.

“But we found it difficult to meet deadlines, because we were spending a lot of time editing where surfaces were corrupt or missing, and working on complex geometry where a high graphic performance was required. We decided that the software was no longer viable for us to meet the standards of mould design and production that we required, so we invested in VISI to provide us with the solution.”

Amongst the many benefits they saw immediately, he was particularly pleased with efficiency improvements in reduced work time. “Thanks to VISI we were able to reduce the time spent on editing surfaces by between 30 and 50 per cent.”

He says the Draft Analysis function in VISI Analysis is perhaps the most important tool for their mould design and production process. “I often use Draft Analysis after finishing the design. It’s so easy to check if there are any undercut areas. Our previous CAD system didn’t fully support that function, so I had to enlarge each part and check them one by one.

“Now, using VISI, I can quickly find any undercut areas through the colour display by draft angle, and it’s possible to split the parting line according to that.”

Although he and his colleagues were apprehensive about changing software at first, he says their fears that it may be difficult to learn were quickly proven to be unfounded. “It was so easy to learn. And given the continuing trend towards small batch quantity production, if demand for products using non-standard mould bases continues to rise we’re likely to invest in another VISI Advanced Mould Tool module.”

“Thanks to VISI, we are able to reduce the time spent on editing surfaces by between 30 and 50 per cent.”